Information about Aerosmith unreleased songs, outtakes, demos and rare recordings, including lyrics, chords and every possible bit available on the net throughout the years.

Aerosmith’s longtime songwriting collaborator, Marti Frederiksen, participated in the Rock N’ Roll Fantasy camp program with a virtual Master Class via Zoom on 2020/07/27. He interacted with +20 fans from around the world for 90 minutes, including stories about the writing process of Aerosmith‘s songs with Joe Perry and Steven Tyler (Jaded, Nine Lives, Beyond … END_OF_DOCUMENT_TOKEN_TO_BE_REPLACED 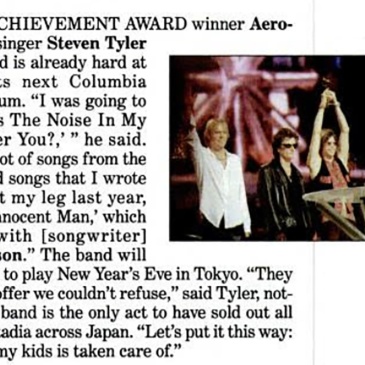 “Innocent Man” is a song left out of the Nine Lives album. Originally written during the 1996 session and produced by Glen Ballard in the South Beach studios. At the time Sony rejected it as “they were looking for something else”, while the band said it sounded like “some other band trying to do an … END_OF_DOCUMENT_TOKEN_TO_BE_REPLACED